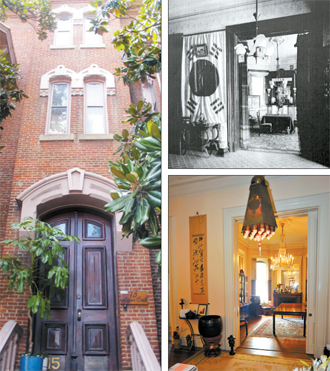 Left: A three-story, Victorian-style building that was a legation of the Joseon Dynasty stands at 15 Logan Circle, NW, in Washington.[YONHAP] Top right: A black-and-white photo of the first floor of the legation in 1900 Bottom right: The current first floor of the building By Lee Sang-bok


WASHINGTON - Korea recovered a piece of diplomatic history by repurchasing a legation building in Washington purloined away by Japan.

But it had to pay a steep price.

The government confirmed Wednesday that it had repurchased the three-story, Victorian-style building located at 15 Logan Circle, NW, in Washington, which had been used as a residence by a Washington businessman since 1977. It paid Timothy L. Jenkins $3.5 million.

Government officials said Wednesday that most of the furniture and decorations have been well preserved for the past century, with an office and a reception room on the first floor.

In 1891, in the midst of growing imperialism in the Asia-Pacific region, Emperor Gojong, the king of the Joseon Dynasty, spent $25,000 of his personal money to buy the building in an effort to boost Korea’s diplomatic ties with the United States and protect against neighboring powers such as China, Russia and Japan.

However, after the Eulsa Treaty, or the Japan?Korea Protectorate Treaty in 1905, in which Japan deprived Korea of diplomatic sovereignty, King Gojong was forced to sell it to the Japanese legation in the United States for $5 in June 1910.

Immediately after the purchase, Japan resold it to an American citizen for $10. After that, the building changed hands several times and was used as a private residence.

Korean immigrants started a campaign to recover the historical building in the 1990s, and in 2009, the Korean government allocated 3 billion won ($2.6 million) of state budget to buy it, but negotiations didn’t go well with Jenkins, who served on the transition teams of former U.S. President Bill Clinton and Washington Mayor Anthony Williams.

The state-run Cultural Heritage Administration launched a full-fledged project to recover the building in February.

“When we began the negotiations in 2008, the owner asked for $6 million,” said Choe Byeong-gu, an official at the Korean Embassy in the United States.

“He even demanded we buy him another residential apartment. We continued to persuade him to change his mind, and he finally made a decision for $3.5 million.”

Kim Jong-gyu, chairman of the National Trust for Cultural Heritage, a civic group that led the project with the embassy, said, “This is not just a purchase of a building, but a restoration of our national pride deprived by Japan.”

The heritage administration said it will conduct an inspection of the building and then open it to the public as a Korean cultural center.