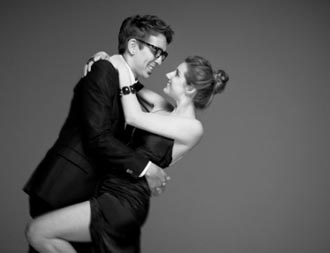 Busker Busker’s drummer Brad walked down the aisle yesterday in his wedding to Dani.

The festivities got under way at Patio 9, a wedding hall in Gangnam District, southern Seoul, at 6 p.m. with close friends and family of the couple.

Brad’s band members played their part with vocalist Jang Bum-joon officiating and singing a song for the newlyweds.

Despite yesterday being their special day, Brad and Dani were legally married in May. The two filed for marriage after being together for six years.

The 28-year-old American revealed the news during the band’s first solo concert at Yonsei University’s Centennial Hall on May 4.

Recently, Busker Busker took to the stage at the opening ceremony of “Super Star K4” at Jamsil Stadium, southern Seoul.