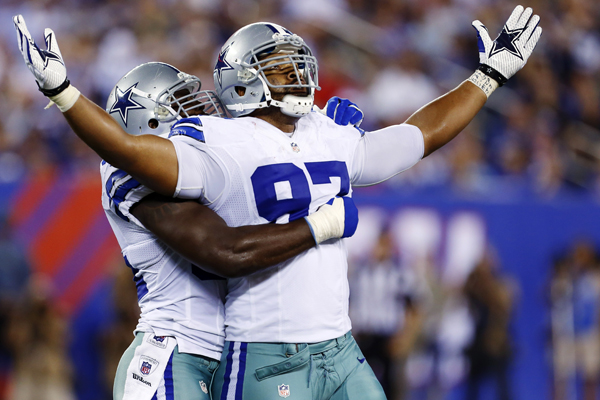 The Giants celebrated their Super Bowl title before the game but Romo and Co. had the last laugh as the quarterback threw for a total of 307 yards and wide receiver Kevin Ogletree caught two touchdown passes.

“Our approach was to take it one play at a time,” Romo said. “You have got to be able to execute plays and our team took that approach. It was exciting to see.”

Romo completed 22-of-29 passes with an interception for Dallas, who finished last season with an 8-8 record and missed the playoffs.

Ogletree recorded the first two touchdowns of his career while making eight catches for 114 yards. DeMarco Murray added 131 yards on 20 carries for Dallas.

“We worked hard for this,” Ogletree said. “We felt good out there for the first game. I just wanted to do what it takes to help my team and be accountable.”

Jason Witten, who suffered a lacerated spleen in the pre-season, finished with two receptions for 10 yards. He was cleared to play just prior to the opening kickoff.

Quarterback Eli Manning completed 21-of-32 passes for 213 yards and a touchdown for the Giants, who won its final half dozen games last season to become the first 9-7 team in league history to win the Super Bowl.

Ahmad Bradshaw carried the ball 17 times for 78 yards and a touchdown, while Victor Cruz led all New York receivers with six catches for 58 yards.

“You need to have that killer instinct. We told ourselves ‘we got to do it now. It is time,’?” Romo said.

This year, the opening game was moved from Thursday to Wednesday night so it wouldn’t conflict with President Barack Obama’s speech at the Democratic National Convention.

For the first time since 2001, the NFL was forced to use replacement officials. The regular officials have been locked out since June, and a last-ditch effort to negotiate a labor settlement ended Saturday when neither the league nor the officials union budged from their positions.

The Cowboys are hoping that Wednesday’s win is a reversal of fortunes. They have now won just three of 10 contests with the Giants since early 2008.

At the end of last season, the Giants beat the Cowboys twice in three weeks. Dallas is also the first team to beat the reigning Super Bowl winner in the league opener since the NFL began the tradition of having the champions host the season kickoff game in 2004.

Key games on Sunday include New England at Tennessee, San Francisco at Green Bay and Washington at New Orleans.