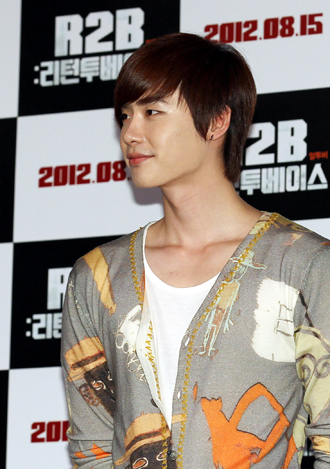 Actor Lee Jong-suk has agreed to star in Nicole’s music video for the song “Lost.”

Lee decided to take part in filming to help out his co-host on SBS’s “Popular Songs.” The two will play lovers in the clip, and Lee will play the role of a smitten boyfriend who feels the brunt of a break-up.

Fans of Lee will no doubt be thrilled to see Lee in various modes from him cooking to frolicking outdoors with his fictional girlfriend.

Apart from appearing in the KARA member’s music video, Lee has a lot on his plate right now with preparations for the film “Physiognomy,” which stars Kang Sang-ho and is directed by Kim Dong-hyuk. The film is set to be released early next year.

For now, the heartthrob actor who shot to fame playing a gay musical prodigy in “Secret Garden” (2011) is busy hosting the SBS music countdown show.

In the last year, the 22-year-old model-turned-actor has been in various hit productions from “Korea” with renowned actress Ha Ji-won to “R2B: Return to Base” with Hallyu singer Rain.
By Carla Sunwoo