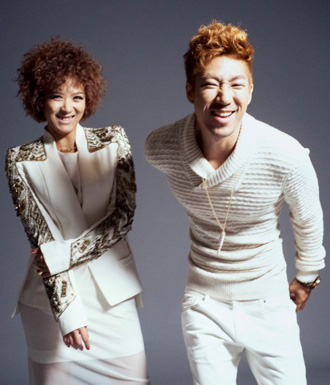 Hip-hop couple Tiger JK and Yoon Mirae has taken part in a special pictorial for the Hallyu magazine K STAR, which covers K-pop news in English.

In the September edition, the couple can be seen dressed in matching white outfits and talk in interviews of their career plans and life together.

“We plan to make a collaborative album with Bizzy on board as well,” the couple is quoted as saying.

As to launching their careers abroad, Tiger JK said the duo had plans to take over the world, one step at a time.

“Just as Chow Yun-fat became known in Hollywood as ‘Hong Kong’s finest actor,’ we hope to be known abroad as ‘Korea’s finest artists.’”

This year has been a big one for the power couple.

Yoon was asked to be a judge again on “Super Star K” and made her mark in the U.S. by featuring in Far East Movement’s single “Live My Life”

Meanwhile, her hubby gained recognition in South America by topping the K-pop chart on a Brazilian music Web site.