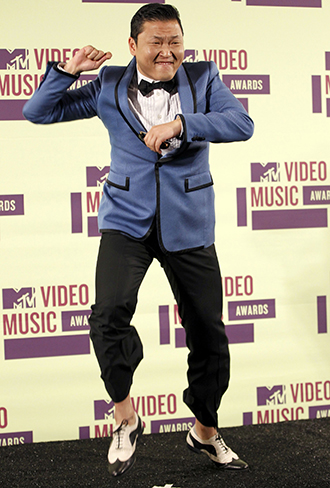 It was the first episode of the 38th season for the iconic show. Psy appeared in a hat store scene, after a clerk pushed a button on the counter, he did his trademark horse-riding dance and other gestures featured in “Gangnam Style.” And the audience was delighted.

“I have just finished [filming] at SNL,” Psy said in a tweet yesterday. “I am filled with emotion. Every day is so unreal.”

The 34-year-old Korean singer previously appeared on “The Today Show” on NBC and “The Ellen DeGeneres Show.” “Gangnam Style” rose to 64th on the U.S. Billboard Hot 100 Chart on Friday, the highest rank ever for a Korean musician.

Scooter Braun, the manager of Justin Bieber, has taken interest in Psy and plan to help him make inroads into the U.S. market. Braun hinted at Psy’s appearance on SNL in a tweet hours before the show.

Psy will return to Korea on Sept. 25 for a two-week break and then ride off again to the United States.