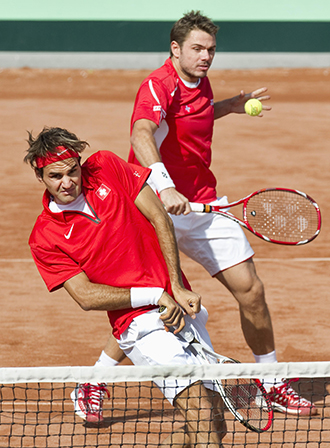 Switzerland’s Roger Federer, left, and Stanislas Wawrinka were stunned by the Netherlands. [REUTERS/YONHAP]

PARIS - The United States stayed alive in its Davis Cup semifinal against champions Spain on Saturday, while four-time runner-up Argentina lost its doubles match as well as Juan Martin del Potro against the Czech Republic.

The Olympic and U.S. Open champions secured the crucial point, which will mean a tie, or elimination round, will be decided on Sunday (Central European Time) with a place in November’s final at stake. Saturday’s win took the Bryans’ Davis Cup record to 20-2. “They’re pretty good in the clutch and they get us to Sunday. We’ve got a chance,” said U.S. captain Jim Courier.

Five-time champions Spain are defending a run of 23 consecutive home victories in the tournament, a streak stretching back to 1999.

Tomas Berdych and Radek Stepanek eased past Carlos Berlocq and Eduardo Schwank 6-3, 6-4, 6-3 at a shell-shocked Parque Roca to take their Davis Cup record to 11-1.

In the playoffs, where victory assures a place in the World Group for 2013, the Netherlands stayed in contention against Switzerland in Amsterdam when Robin Haase and Jean-Julien Rojer stunned Roger Federer and Stanislas Wawrinka 6-4, 6-2, 5-7, 6-3.

Federer and Wawrinka, who were doubles gold medalists at the 2008 Olympic Games, had both won their singles on Friday to give the Swiss a 2-0 lead.