Kim Ha-neul says she had no friends during school years

Kim Ha-neul says she had no friends during school years 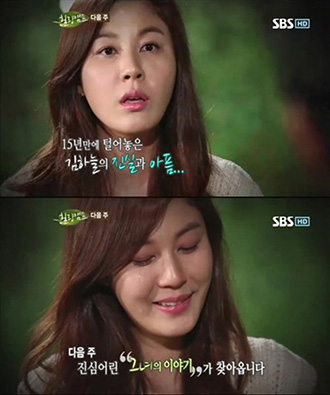 Actress Kim Ha-neul made a shocking revelation during an episode of “Healing Camp,” a talk show that digs up controversial and often painful pasts of celebrities on Sept. 17.

“I have no celebrity friends,” said Kim to the amazement of the show’s hosts, Lee Kyung-kyu, Kim Je-dong and Han Hye-jin,
Her next comments were even more shocking as Kim added, “during school I was always a loner.”

Just when things couldn’t have made Kim’s life look sadder she added that some five years ago, she suffered one of the tragic moments of life.
“When I turned 29, I ran out of luck in love and work,” said Kim while shedding tears. “My career came crashing down and my love left me, too.”
Through two episodes, Kim is set to reveal some of the toughest times she has faced.