Kang back in spotlight after tax evasion scandal

Kang back in spotlight after tax evasion scandal 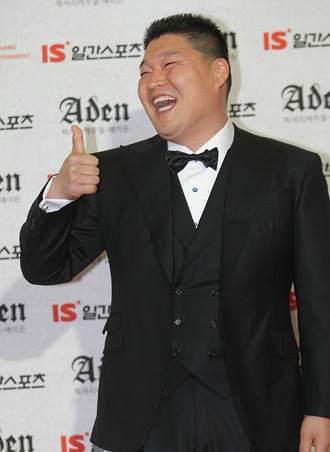 After one year of retirement, one of the nation’s top comedians, Kang Ho-dong, returns to television next month. [JoongAng Ilbo]

Kang Ho-dong is back. The popular wrestler-turned-comedian who announced his retirement one year ago after being found guilty of tax evasion will return to the spotlight as a host on SBS’s “Star King” next month.

The National Tax Service found that Kang, who received 12 million won ($10,800) per episode, had evaded his taxes. He became the center of attention in the entertainment industry with the scandal leading to public uproar and the deterioration of his reputation.

But Kang is betting that memories are short on the peninsula and announced his return just one year after walking away from his shows.

“Kang Ho-dong will be back around the middle of October and he is first returning as a host of SBS’s ‘Star King,’?” said a senior broadcasting official who spoke on the condition of anonymity. “He will also be making a comeback to MBC’s ‘The Knee-Drop Guru’ in November.”

Kang hosted “Star King” on Saturday nights for four years from 2007. While he was in temporary retirement, other entertainers, including Leeteuk, a member of boy band Super Junior, filled the void. But with Leeteuk leaving soon to fulfill his mandatory military service at the end of the year, Kang’s comeback will be beneficial to both parties.

SBS is planning on welcoming back Kang with a bang, according to sources. The major network already has plans to create a new variety program for the comedian to star in this spring.

In November, Kang will come back to his other signature show, “The Knee-Drop Guru,” according to sources. The show ended its run when Kang retired. He had been the host since the show’s first episode in 2007. The former hit show that topped viewer ratings is seen as a clear path for Kang to slip back into the spotlight.

“In recent times, the entertainment shows of MBC have lost a lot of popularity,” an MBC official said. “The audience might react to a new program in a negative way, so we thought that returning with an already existing show was our best shot.

“Kang might feel burdened to start hosting shows all at once. I think he first wants to see how the audience reacts to his comeback.”

Fans will have to wait a little longer to see Kang back on KBS. Although there have been various rumors about Kang’s return in the second season of variety show “1 Night, 2 Days,” the cast is already well established.

Thus KBS is planning on giving rise to a new program that matches well with Kang’s character, who is widely beloved with his uncle-next-door image. The network also plans on teaming Kang up once again with producer Na Young-seok, who previously worked on the first season of “1 Night, 2 Days.”

Hopes are high for the duo. Since Na has known Kang for a number of years, he is familiar with the comedian’s strengths and weaknesses and is able to come up with a show that suits his tastes.

After retiring as a ssireum (traditional Korean wrestling) champion, Kang broke into the entertainment scene back in 1993. Many were doubtful about his transition to show business, but Kang, who speaks with a strong Gyeongsang dialect, soon started to stand tall. He is especially good at taking control of the guests on his show through his presence and straightforward questions.