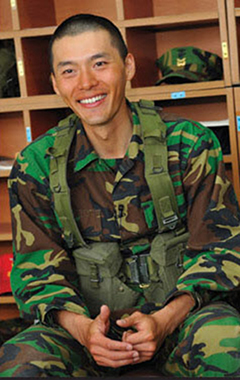 Hyun Bin, currently serving as corporal in the Marine Corps as part of his mandatory military service, will be given a nice present in time for Chuseok holiday, or the Korean harvest festival.

Ilgan Sports reported on Sept. 20 that the Hallyu actor will be promoted to sergeant from October.
The promotional ceremony for Hyun will take place on Oct. 1, the national Armed Forces Day.

“The ceremony will be attended by all the military personnel at the base and Hyun will spend Chuseok here,” a spokesperson for the military told Ilgan Sports.

Despite moving on up, the promotion won’t see Hyun’s commitments increase. “He’ll just keep performing the tasks he’s appointed to do.”