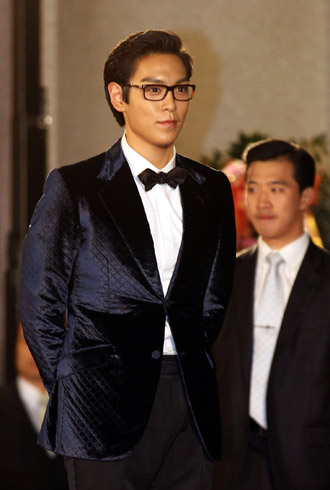 Boy band member T.O.P is recuperating after injuring his hand on set of his movie last Friday.

While filming an action scene for “The Alumni,” the Big Bang member had fragments of glass fall on his hand. The incident led the star to have a minor surgical procedure.

T.O.P was released from the hospital yesterday.

The injury comes at the worst possible time as Big Bang’s world tour is scheduled to start on Friday.

Although the agency said the 24-year-old’s health comes first, T.O.P has said that he would continue on with the schedule as planned for the sake of his movie and band members.

While T.O.P was bedridden, his band accomplished another feat: selling out all 24,000 tickets for the California and New Jersey legs of the “Big Bang Alive Galaxy Tour 2012” in two hours on Saturday.

The band is set to perform at the Honda Center in Anaheim, California, on Nov. 3 and at the Prudential Center in Newark on Nov. 9.