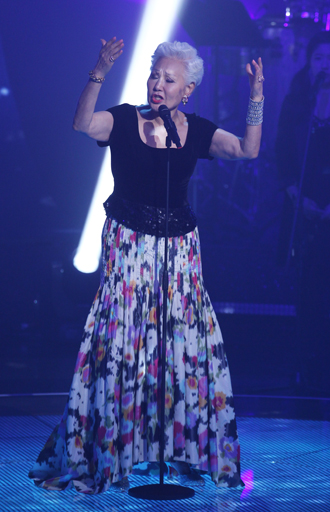 “The Patti Kim Show” on JTBC will look back at legendary diva’s 54-year singing career. Provided by JTBC

The program, scheduled to premiere tomorrow night on JTBC, will invite influential figures and K-pop stars for interviews while the 74-year-old diva performs her classics on stage. The series, set to run for 16 weeks, will be Kim’s final farewell before her retirement as a singer.

On the set of the premiere in central Seoul, Kim started off with her hit song “I Can’t Forget,” saying, “I need to go straight into singing because singing a song really puts my mind at ease.”

Born in 1938 as Kim Hye-ja, the Korean began her career 20 years later as a singer for the U.S. military stationed in Korea. Since then, she has captured hearts across the nation with hits such as “Seoul Anthem,” “I Can’t Forget” and “The Thorn Birds.”
She has been well received overseas as well, having been the first Korean singer invited to perform in Japan in 1960 and Carnegie Hall in New York in 1989.

“The Patti Kim Show” allowed the singer and her fans to reflect on her career, which struggled at times under a much stricter censorship regime than today’s Korean stars experience.

“I changed lyrics into Korean in the 1960s and 1970s because singing a song in English was banned back then,” Kim said.

Although it was unconventional at the time to name a show after one singer and allocate the entire broadcast to the artist, Kim’s appearance was considered a success and the program branched out into similar renditions such as “The Lee Mi-ja Show” and “The Yoon Bok-hee Show.”

On the JTBC series premiere set to air tomorrow night, the diva chats with comedian and talk show host Shin Dong-yup, and performs “The Thorn Birds,” “I Can’t Live without You” and “Love is Forever.”

Members of the audience, inspired by the songs first performed more than 20 years ago, shared their memories of the songs and times with the singer.

One middle-aged woman recalled an event where she snuck out of work in order to attend Kim’s concert and later wrote letters to her boss trying to explain the situation. Asked why she was so passionate a
bout the concert and the singer, the fan said, “I just wanted to go and listen to Patti Kim’s songs.”

A woman in her 80s said she attended a performance while she was very ill. Kim walked down to the seat and held the fan’s hands.
“I’ve never thought I could meet Patti Kim while I was alive. I feel so thankful,” the fan said, bursting into tears.

The music show, however, is not all about nostalgia-inducing songs reminding fans of the good ol’ days. The singer said that she also wants to invite contemporary stars to sing their songs on her show.

In the first segment, Kim performs Girls’ Generation member Taeyeon’s ballad “If.” Her soulful and deep voice was in contrast with Taeyeon’s soft and gentle tone, making it a distinctly Patti Kim version.

She also takes note of the success of K-pop worldwide and praised young up-and-coming idol singers for their efforts to spread the movement abroad. Kim mentioned the global boom of Psy’s “Gangnam Style” as the song played in the background.

“It’s really great to see singers like Psy who have risen to fame around the world,” she said. “If the technology in the past was as great as it is today, there could’ve been ‘Patti Style’ going viral,” she joked as she bursted into laughter.

She introduced boy band 2AM, saying that “young idol singers nowadays are pretty, handsome and, at the same time, good singers and dancers.”

An official at JTBC said that the program plans to invite boy band Beast as a special guest for the second installment of the series, as Kim wishes to interact with younger singers.

In addition to the K-pop guests, the music show is poised to bring in other well-known public figures who have played a role in shaping Korean society, including Olympic heros, influential politicians and business leaders.