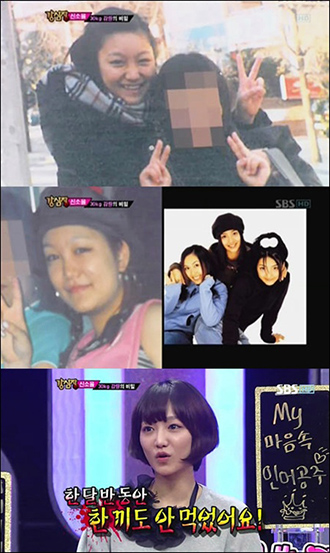 Actress Shin So-yul revealed a diet secret while on an episode of “Mighty Heart” on Oct. 2.

Shin said that up until her first year of college she was a size 77 - one of the biggest sizes for women in Korea - and weighed 75 kilograms (165 pounds).

Shin then went on to tell a bitter yet funny story of what prompted her weight loss.

“One time I was with my boyfriend and his friends and fell asleep,” said Shin.
“While I was dozing, I heard his friends ask my boyfriend if he was okay with me being fat, to which he replied ‘She feels more like a sister than a lover.’”

After eavesdropping on the conversation, Shin said she was determined to drop a few sizes and for a whole month consumed only water.

“If I was really hungry I’d have a leaf of cabbage and eventually got down to 46 kilograms,” said Shin.

Netizezns were torn over the shock announcement made by the actress from the hit show “Respond 1997.”

Many said they admired her determination while some thought it was a bit extreme.