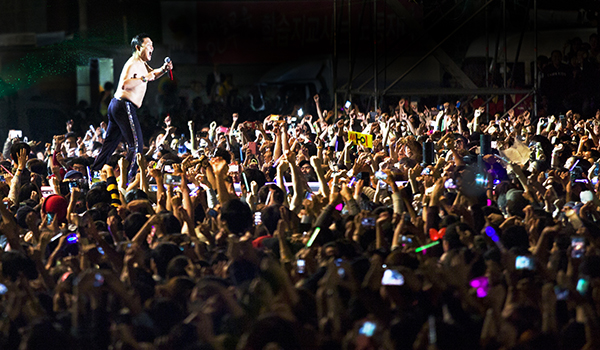 In the end, Psy bares his chest - as promised - to a home crowd of 80,000 that went wild and turned up hours before the free show at Seoul Plaza in front of City Hall in Jung District, central Seoul. By Park Sang-moon


Rapper Psy, riding a wave of international fame from the success of “Gangnam Style” and the giddyap dance he created to accompany it, gave a free concert at Seoul Plaza Thursday night, drawing 80,000 diehard fans and curiosity seekers.

The turnout was far more than the 50,000 that was expected and it included 700 journalists from home and abroad.

People started staking claims to space around the T-shaped stage from Thursday afternoon, even though the concert didn’t begin until 10 p.m.

At 8 p.m., more than 45,000 had come to the plaza. Giant screens on the stage lit up with the words: “This performance will be watched worldwide, so let’s show the whole world that Koreans have good manners.”

Although there was little in the way of crowd control, there were no ugly scenes or accidents and only six people fainted and had to be taken away by ambulance.

The main suspense during the 110-minute concert was the wait for “Gangnam Style” and whether Psy, 34, would follow through on a promise to dance his horse dance topless to celebrate its success.

On his return from appearances abroad last week, Psy said he would if “Gangnam Style” hit No. 1 on the Billboard Hot 100 chart. It was announced yesterday that the song was in the No. 2 slot for the second week.

Psy, which is short for Psycho (his real name is Park Jae-sang), introduced himself as “the only singer to be called a new artist abroad after being active for 12 years.”

“I really didn’t think a Korean star could rise to such fame,” said Jeon Ji-ho, a 26-year-old student who came with a couple of friends from his hometown of Incheon. Although the concert was streamed live through Live Seoul, YouTube and YouStream, the servers crashed, making it impossible to view. It was also broadcast live on JTBC and News Y.

Psy took time between each song to thank his fans.

As the concert drew to a close, Psy started showing his whacky personality.

After warning minors that “drinking is a filthy habit that you should, if possible, not even start,” he downed a bottle of soju, all the while drenched in sweat from his vigorous moves on stage.

“I knew one day someone big would come out of Korea,” he said. “I just never thought it would be me.”

Psy confessed that he was daunted by the thought of a follow-up to “Gangnam Style.”

“You know I’m bound for the U.S. in a few weeks and have to produce a second song by late November. I think I might just die before then,” he joked. “Seriously, how can I follow up after ‘Gangnam Style?’?”

The concert ended with an encore of “Gangnam Style,” and Psy came through on his promise, Billboard Hot 100 top slot or not. His shirt came off.