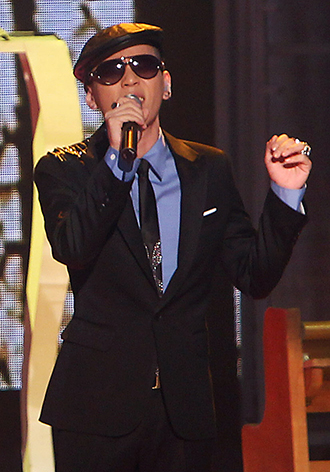 Ulala Session’s front man Lim Yoon-taek became a father on Oct. 7. His wife of five months gave birth to the couple’s first child, a baby girl who weighed in at 3 kilograms (6.6 pounds), at a hospital in Seoul.

Upon becoming a dad, Lim conveyed his joy to Sports Hankook and said, “I didn’t think a miracle like this would happen to me.”

Lim was said to be ecstatic and dumbfounded by the birth.

It also seems like another miracle is taking place in the life of the singer as his health is taking a turn for the better of late.

Lim’s band will hold a concert in Daegu on Oct. 27, and the singer, who has been battling stomach cancer, will be on stage.

Ulala Session was the winner of last year’s “Super Star K.” It was well known that Lim was ill during the show, and there has been much discussion online, with many accusing Lim of using his sickness as a marketing gimmick.

To clarify the matter, Lim has talked on various TV shows and expressed his sadness over the verbal attacks.