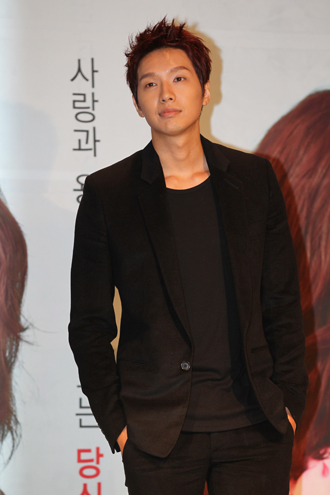 Although it’s only been two months since he entered the Army, news about Ji Hyun-woo is starting to surface.

When a photo of Ji with his comrades at the barracks in Wonju, Gangwon, began to circulate online, Ji’s agency issued a statement to let fans know he’s doing fine.

“He’s well but hasn’t been given a holiday yet,” said an agency spokesperson, who added that although he’s not been assigned to the military’s PR division, “he’s been taking part in various festivals during his time there.”

The agency added that Ji had no intention of asking for a transfer to the division where most entertainers are placed, but that he’d continue to entertain the troops when asked.

Leading up to his delayed enlistment in early August, Ji was in the spotlight for his public declaration of love for his co-star, Yoo In-na.

At a press conference in June for “Queen In-hyun’s Man,” Ji proclaimed, “I wanted to say this in front of all the fans of the drama. I love Yoo In-na.” The two began dating shortly after.