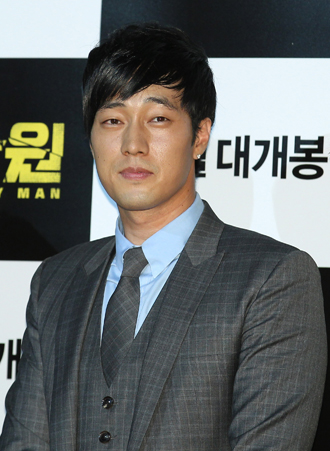 So Ji-sub’s suit as worn by the star in a promotional poster for his new movie “A Company Man” has drawn 19,000 bids online, more than any celebrity-donated item to date.

Since going up for grabs on Oct. 4, So’s suit has bumped Eum Jung-hwa’s dress from the movie “Dancing Queen” to second place.

Show Box, the distributor for “A Company Man,” said the auction will end at 11:59 p.m. tonight.

The event is being held to promote So’s new action flick released Oct. 11.

In “A Company Man,” the 35-year-old So plays Hyung-do, a hit man disguised as an ordinary office worker.

Hyung-do is regarded as one of the best by the organization that hired him as a section chief in its sales division.

Problems arise when Hyung-do meets a woman, falls in love and tries to quit the organization, which is reluctant to let him go without a fight.