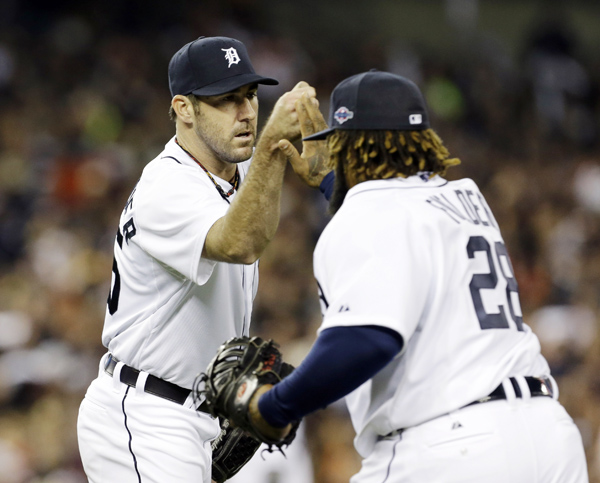 Justin Verlander and first baseman Prince Fielder celebrate after the New York Yankees’ Raul Ibanez grounded out to Fielder in the seventh inning during Game 3 of the American League Championship Series Tuesday in Detroit. Verlander threw eight shutout eight innings in the 2-1 victory that leaves Detroit just one game away from a spot in the World Series. [AP/YONHAP]


Justin Verlander fell just short of a complete game then watched New York’s rally come up short as Detroit’s 2-1 win on Tuesday put them on the verge of sweeping the Yankees out of the American League championship series.

Verlander pitched eight scoreless innings but ran into trouble in the ninth when Eduardo Nunez homered to make it a one-run game and forced the Tigers to use their bullpen.

Reliever Phil Coke came in for the final two outs and while he gave up two hits, he eventually struck out Raul Ibanez to give Detroit a 3-0 lead in the best-of-seven series.

“There’s no quit in them; at the same time there’s no quit in us, either,” Coke, a former Yankees player, told reporters after recently taking over as closer from the struggling Jose Valverde.

“How many teams have been able to say that [they are up 3-0 on the Yankees]? It’s pretty special.”

Yankees manager Joe Girardi, having lost captain Derek Jeter to a season-ending ankle injury, benched Alex Rodriguez and Nick Swisher in an effort to spark his team, but New York is seeing its season slip painfully away.

Replacements Eric Chavez and Brett Gardner went a combined 0-for-7 as New York has managed just one run in the last two games.

Game 4 is in Detroit on Wednesday with the Tigers needing just one more victory to book a spot in the World Series.

While he fell just short, Verlander has allowed just two runs in 24 1/3 playoff innings this season.

“I was able to make big pitches when I had to and the guys played defense behind me,” said Verlander, after throwing 132 pitches on the night.

The Yankees managed just three hits against him on Tuesday, including a pair of singles by Ichiro Suzuki, though the final one by Nunez gave the visitors brief hope of a comeback at Detroit’s Comerica Park.

Earlier, Detroit’s Delmon Young blasted a solo home run in the fourth inning, and New York starter Phil Hughes was forced to leave with a back injury.

Young’s homer was his seventh in the past two postseasons.

“I think he kind of froze when it was hit, and it was hit farther than he thought,” Girardi said of the play.

“‘How do we win [Wednesday]?’ That’s what I start thinking about. Pretty simple.”