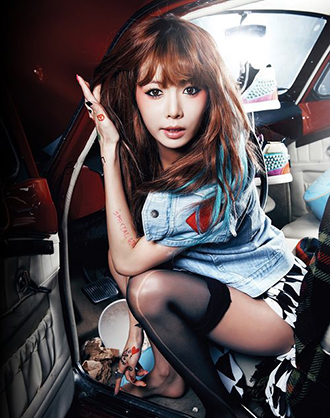 Despite being busy with her solo EP promotions, Hyun-a has taken some time off to help a newbie band.

The 4Minute member, who is currently riding the Hallyu wave with the release of her EP “Melting” on Monday, raps in “She Is My Girl,” the title track of Indonesian boy band S4’s debut EP.

The song will be released online Tuesday. The Rainbow Bridge agency says it has an “addictive melody and strong beat.”

The boy band will return the favor by performing at 4Minute’s “Volume Up Party” next Wednesday in Indonesia. It will be S4’s first stage performance since the four members rose to fame through the Korean-Indonesian collaborative audition program “Galaxy Superstar.”

Since winning on the show, the band has received nine months of training through Rainbow Bridge.

Online, Hyun-a is making a name for herself as a solo artist, with the video for “Ice Cream” being praised by fans and media, including Billboard.com.

Leading up to its release, a teaser garnered more than three million views in just three days.