Some of YG’s greatest hits are her album covers

Some of YG’s greatest hits are her album covers 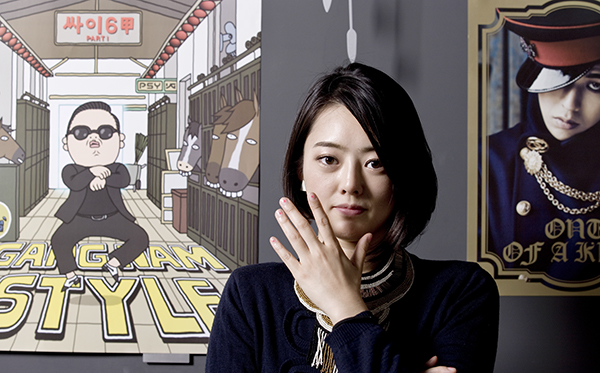 For Jang Sung-eun, creative director of YG Entertainment, a singer’s identity is the most important aspect of effective album cover design. By Kwon Hyuk-jae


The late Apple co-founder Steve Jobs once said, “Design is the fundamental soul of a human-made creation that ends up expressing itself in successive outer layers of the product or service.”

In the 21st century, design embraces every effort aimed to enhance life.

Recently, the JoongAng Ilbo, with help from experts at the Seoul Arts Center, selected 10 artists likely to define the design scene in Korea.

First on the list is Jang Sung-eun, creative director of the record label and talent agency YG Entertainment. Jang was in charge of designing the cover for Psy’s sixth album, titled “Gangnam Style.” The cover shows the singer’s chubby face attached to a mermaid’s body shaped into the number “6.” The cover is not pretty, but it’s unique, a word that pretty well describes Psy’s overall image and character.

Psy is not the only one who has benefited from Jang’s creative flair. She was also involved in the fifth mini-album of idol band Big Bang, one of the most successful Asian acts in the world.

“Alive,” released early this year, is decorated in icy silver and blue. The chilling image was intended to show fans the numerous hardships band members endured during their career break.

The cover was produced with steel, and it was purposely not protected with rust inhibitors so it will turn into a vintage-looking rusty item as time passes.

This type of avant-garde art is what Jang seeks to deliver. After being scouted by Yang Hyun-suk, the CEO of the YG Entertainment, in 2009, Jang established her own design center within the agency.

Even in a field that is well known for being full of early adapters who thrive on pushing the envelope, designers working in show business agencies are not common.

Consisting of Jang and the four members of her team, the design center is a seemingly small piece of the major management company that employs a total of 120 people. Jang was picked to be on the top-10 list because her daily life revolves around design, which is a crucial factor when working in this hypercompetitive business.

From left: “Alive” album covers made of steel reflect Big Bang’s tough times; Psy’s sixth album cover is faithful to the singer’s playful B-list image; and Taeyang means solar in Korean, so when the singer’s first solo album is turned upside down, the image of the sun on the CD jacket seems to move. Provided by YG Entertainment

And as the entertainment industry grows, several other agencies have started to invest in the design business because the appearance of a singer’s album cover is now considered to be essential part of the artist’s image. And eye-catching album art also can boost sales.

“The role of the design is to create a synergy effect,” says Jang. “For example, G-Dragon’s brand value is not only based on his incredible musical talent, but also on his unique fashion sense. We focus on creating an album design that goes hand in hand with the artist’s brand image.”

“You can’t always base your designs on just pretty faces,” she says. “It’s important to be consistent with the singer’s image. That’s what we tried to do with the ‘Gangnam Style’ album cover. We tried to match his music content with the overall brand image that Psy has maintained throughout his career.”

Jang has been a record label designer for 13 years. At first, she wasn’t that interested in entering the entertainment business, but because she had played the piano since she was 4 years old, music was always in her mind.

Jang really started to get interested in the field of design while taking an industrial design class as a sophomore at Handong Global University.

In her senior year, she worked for Gigic, the first firm in Korea to specialize in designing labels for the recording industry.

“Design is about uniting seemingly disparate factors,” she says. “In my opinion, good design means ‘less is more.’ It is something that is not extravagant, but straightforward and clear cut.

“If a designer keeps adding frills to make something look good, it only gets worse,” she adds. “When designing, the key is to highlight the core image, the essential character of the subject.”