Suzy of Miss A awarded for her style

Suzy of Miss A awarded for her style 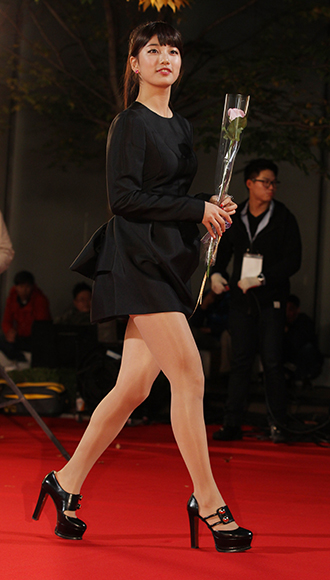 Suzy of Miss A has been named the Teenagers’ Style Icon at the fifth annual Style Icon Awards held by the entertainment company CJ.

The ceremony that took place on Thursday at the CJ E&M Center in Sangam-dong, western Seoul, recognized entertainers who are leading figures in the local fashion scene.

At just 18 years old, Suzy has become the youngest award recipient in the award show’s history.

“You know, we recently released a new song and are back in the spotlight,” said Suzy, referring to Miss A’s latest promotions for its new EP “Independent Women Pt. 3.”

Meanwhile, the grand prize, Style Icon of the Year, went to Jang Dong-gun, who reminded TV viewers that he’s still got it going on when he appeared in this year’s hit drama “A Gentleman’s Dignity.”

According to CJ, the 40-year-old Hallyu star was awarded for “exemplifying just how fashionable and chic 40-something-year-old males can be.”
By Carla Sunwoo