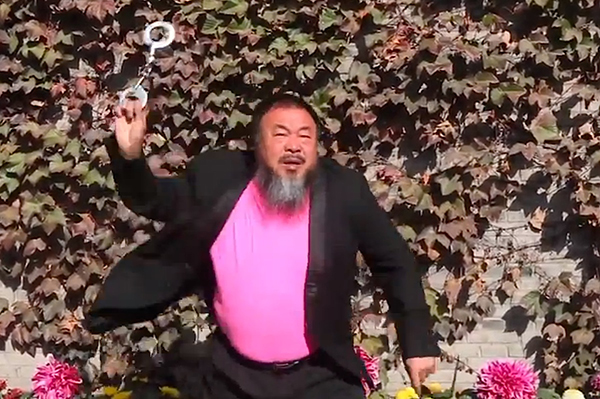 
Chinese dissident artist Ai Weiwei is the latest to go “Gangnam Style’’ - but in a trademark act of irreverence, he’s thrown in a pair of handcuffs and a poke at Chinese censors.

Ai said he and several friends made the video Wednesday and uploaded it overnight. In one scene, he swings two pairs of handcuffs while dancing. The video also was posted on Chinese Web sites, but censors apparently had scrubbed it off many of them by Thursday morning.

Ai said Thursday that he decided to make the video after learning that the home of the family of his friend Zuoxiao Zuzhou, a rock star in China, was being demolished. The artist said he thought a little humor might alleviate some of the frustration felt by the public.

The video is titled “Grass Mud Horse Style,’’ in Chinese, a sly insult Ai coined as a stab at the country’s Internet censors.