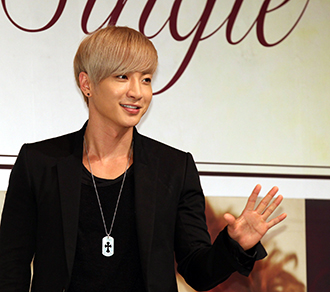 
Leeteuk of Super Junior expressed his frustration with sasaeng fans - overzealous, borderline stalker fans - via his Web site yesterday. The post came one day before he begins mandatory military service.

“With just one day left, sasaeng fans are still following me around,” said the Super Junior member via his Me2Day Web site.

Other fans were quick to console the singer by criticizing those who often trail behind their favorite entertainers all day.

“Sasaeng fans are not fans at all,” quipped one netizen before wishing Leeteuk all the best and urging him to spend his remaining hours with his family and loved ones. The 29-year-old who entered training facilities at the 306th Reserve Force Battalion in Uijeongbu, Gyeonggi, today for five weeks spent the last few days preparing for his two-year leave from the spotlight. On Friday, the idol singer shaved his head in front of the camera for the fans.