Alex talks about the drunk-driving incident

Alex talks about the drunk-driving incident 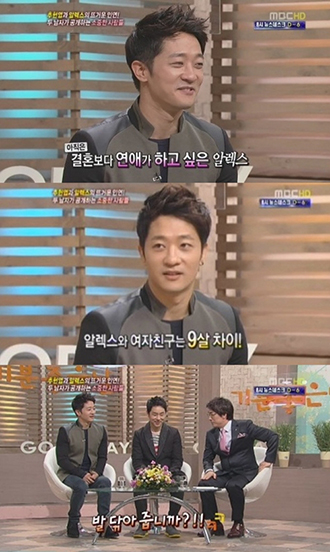 Singer Alex appeared on MBC’s “A Good Day” on Oct. 30 and opened up about his drunk-driving incident in July.

“It’s not something I take lightly and no doubt not something that can be forgiven easily,” said Alex on the morning show.
Since then, the singer said he’s taken time off to reflect on his life, the first time that he’s been able to since he made his debut some nine years ago.

The 32-year-old was pulled over by police and found to have a blood alcohol level of 0.13 percent, a level sufficient for revoking his license.
Police pulled him over at about 2 a.m. around the Gangnam District office.
He was on his way home after spending the night out drinking with friends.

He allegedly told police he had a bottle and a half of soju before taking the wheel.
A spokesperson from the singer’s agency said at the time that the singer was in the wrong and will be “repenting” for the regrettable incident while contemplating whether or not he will remain active in his career in the short term.
By Carla Sunwoo [carlasunwoo@joongang.co.kr]