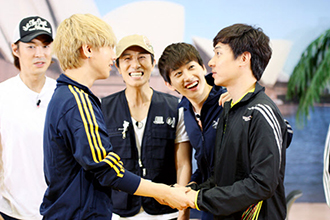 The variety program will be aired on Mnet Japan and is set to tantalize fans with the band members’ comical side.

The show, which aired in Korea from March this year, features the group taking on various missions and competing against one another. It also invites guests to participate in a segment similar to a talk show.

“We want to show the Japanese fans that the boys also have personalities like no other,” said a spokesperson for the long-standing idol group.

The Japanese airing was a logical step as fans there as well as those in China are currently connecting online every Sunday to watch the show live in real time.

This year was a big one for Shinhwa as it held its first tour in more than five years.

“The Return” tour saw the six-member group take on 10 shows in eight Asian cities, performing for more than 91,000 fans in all.