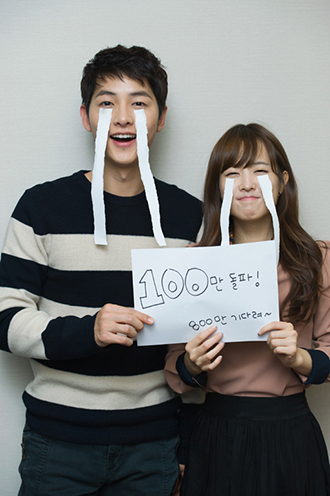 Pretty boy actor Song Joong-ki who is known for his charms has brought smiles on his fans’ faces with a picture of him and co-star Park Bo-young with sticky-taped fake tears and a sign that reads “1 million views check! Target 8 million.”

The pictures were uploaded on Nov. 4 by the stars of “A Werewolf Boy” after the film exceeded 1,003,637 views in just five days after opening.

Fans were stoked with the pictures and were quick to congratulate the two stars with many commenting that they looked like a perfect couple.
By Carla Sunwoo [carlasunwoo@joongang.co.kr]