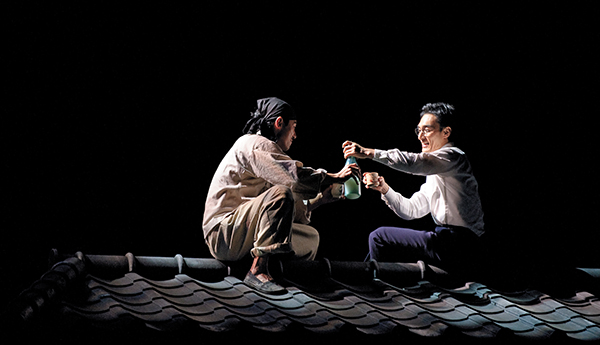 Cha Seung-won (left) and Tsuyoshi Kusanagi in a scene from the Korean-Japanese play “Bring Me My Chariot Fire.” Provided by the Umeda Arts Theater


TOKYO - For the first time in his 15-year career, heartthrob actor Cha Seung-won has taken to the stage to perform in front of a live audience.

His theatrical debut came on Saturday in Japan when he starred in “Bring Me My Chariot Fire” alongside fellow actors Ryoko Hirosue, Teruyuki Kagawa and Tsuyoshi Kusanagi, a member of top Japanese idol group SMAP.

Written and produced by Korean-Japanese director Jung Uee-shin, who is renowned for his production “Yakiniku Dragon,” the play began its run at the Akasaka ACT Theater in central Tokyo.

The venue was jam-packed with fans and the press with no vacancies in the 1,500-seat theater. 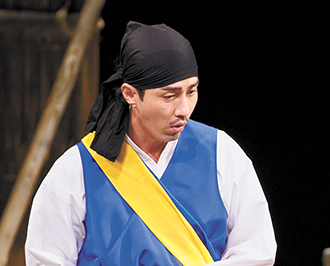 Cha Seung-won stars in “Bring Me My Chariot Fire” in Tokyo on Saturday.

Cha plays the head of a namsadang - a traditional traveling group of Korean performers who sing, dance and perform acrobatics - that comes across a Japanese professor during the occupation period (1910-45).

As the friendship between the two solidifies, they work together with other comrades to preserve traditional Korean art while the Korean Peninsula suffers during Japanese rule.

Kusanagi, who plays the Japanese professor, addresses the audience in both languages.

While talking about his theatrical debut, Cha said it has invigorated his acting career.

“Acting is like pulling something out of me,” he said. “I felt like I needed to start acting again and this time with more passion. I trusted this play even more because it was directed by Jung.”

During one scene where Cha walked on a tightrope, the actor received a round of applause - not for his skillful balancing act, but for his commitment to delivering the best performance possible.

Cha arrived in Japan at the end of September and underwent intense training during the ensuing 40 days.

“Cha works sincerely and he is clever,” director Jung said. “He will soon adapt to acting on stage.”

His performance brought many in the audience to tears, and though the play went on for three hours and 40 minutes, it was met with a standing ovation at the end.

One of the most captivating segments of the play is the depiction of the Suwon Jaeamri Event that took place in 1919.

The Japanese military massacred a number of innocent residents living in the Suwon area, including many who were at the Jaeamri church. The portrayal of Japanese cruelty is expected to create a backlash from the Japanese far-right political party.

“I wrote the script based on the facts. It’s not about saying who’s right or wrong or taking sides between Korea and Japan,” Jung said. “The play is not about ethnicity, war or politics. It’s about humans.”

“Bring Me My Chariot Fire” will be performed in Tokyo until Dec. 1 and will then run in Osaka. The play will be shown in Seoul at the end of January.