Haha and Byul talk about ‘no sex before marriage’

Haha and Byul talk about ‘no sex before marriage’ 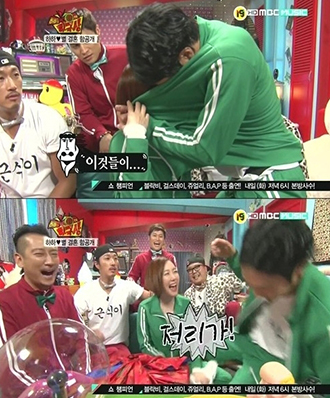 While appearing on MBC Music on Nov. 12, the entertainment world’s newest couple, Haha and Byul, talked about a taboo topic: sex before marriage.
In regards to the announcement, which Haha made at a press conference announcing the two’s upcoming nuptials, the singer said he regretted revealing too much.
“I shouldn’t have said that we were not going to have sex before marriage. There’s just too much emphasis on that now.”

Meanwhile his bride-to-be mirrored his sentiment by adding, “I was surprised when he said that on TV.”
Ever since that episode, apparently everyone has been bringing up the topic around the two.

Byul added that the over-exposure was probably harder on Haha.
“I mean he is a hot-blooded male right?”
Her comments had everyone in the studio in stitches.
The couple will walk down the aisle together on Nov. 30.