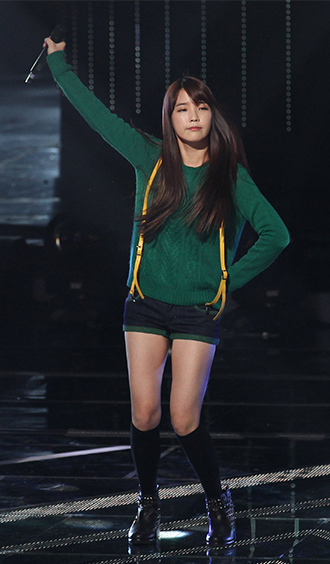 Just days after some 500 netizens joined forces in an online club called “We Demand the Truth from IU,” more than 2,000 fans of the K-pop starlet has allied to stand up for their idol.
The newly formed club titled “We Believe in IU,” stands for trusting that IU is innocent, although the alternate group believes that IU may be hiding the fact that she’s seeing Eunhyuk from Super Junior.

On Nov. 10 IU apparently uploaded on Twitter a picture from her private collection by mistake in which she can be seen in pjs and the Super Junior member with no top on.
Although she quickly deleted the picture, netizens were quick to save the picture and Loen Entertainment said that it was taken when IU was sick at home last summer.
“Eunhyuk was paying her a visit, nothing more,” said IU’s agency.

Following the upload, “We Demand the Truth from IU” was formed on Nov.11.
By Carla Sunwoo [carlasunwoo@joongang.co.kr]