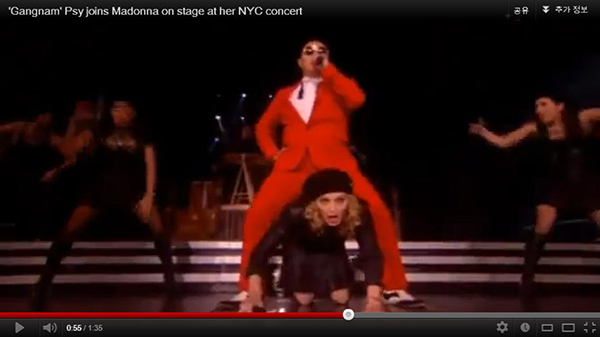 Fans of Madonna were in for a treat when they attended a concert put on by the “Queen of Pop” in New York on Tuesday night.

During a rendition of “Give It To Me,” Psy made a guest appearance through a trapdoor on the stage and the two broke into the horse dance to the song that needed no introduction.

Dressed in a red suit, Psy was in perfect sync with Madonna, and the audience went wild as the 54-year-old crawled under Psy’s legs, only to have the 34-year-old YouTube sensation return the favor.

While the start was promising, according to The Los Angeles Times, it got “a little awkward” during “Music,” as Madonna and Psy both seemed at a loss for how to interact outside the lighthearted confines of his “Gangnam Style.”

As the performance came to an end, Madonna told Psy that she was a big fan, to which he replied, “That’s so sweet. .?.?. In the last couple of months, I’ve experienced so many things, but now I’m at MSG with Madonna!”