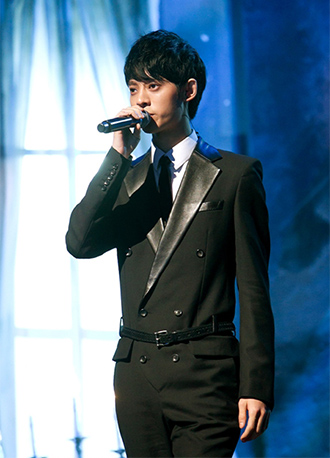 “Super Star K” contestant Jung Joon-young has a skeleton in the closet in the form of an idol group member with smoky eyes, bleached hair and neon jeans.

Although he wears leather jackets now and professes his love of rock, it was revealed that the top-3 contestant on the fourth season of the singing-survival show was a founding member of Led Apple.

Star Kim Entertainment revealed yesterday that “from pre-debut until 2010, Jung trained with the band’s current members.”

However, Jung was locked into a contract elsewhere and wasn’t able to make his debut with the group.

“As fellow trainees who lived together, Led Apple will keep cheering him on,” said the agency, which added that the boy band would make an appearance on the show to cheer him on in person.

According to Star Kim, the purple guitar that Jung played on the show dates to his boy band days.

As well as showing its support for the former member during the final three episodes of the hit show, Led Apple also released a new song yesterday.