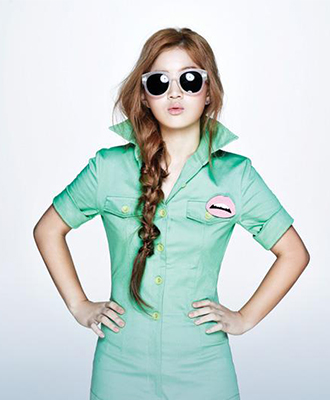 YG Entertainment said the song, titled “Scarecrow,” was given to Yang Hyun-suk from Park as a gift years ago.

Apparently, the song was a secret even at YG headquarters as late as four days before its release.

Yesterday, the agency also revealed a picture of Lee’s notes on its blog to coincide with the song’s launch.

The picture shows the song’s lyrics and notes as well as doodles made by the 16-year-old new artist. Yang had even suggested that Lee draw the main picture on the album jacket.

Meanwhile, Lee’s debut song “1,2,3,4” is currently No. 1 on various music charts since being released less than a month ago.

YG’s head honcho is very much involved in launching the career of Lee, the runner-up contestant on “K-pop Star.” As she is the agency’s only new artist in the last three years, Yang is said to be taking a very hands-on approach.