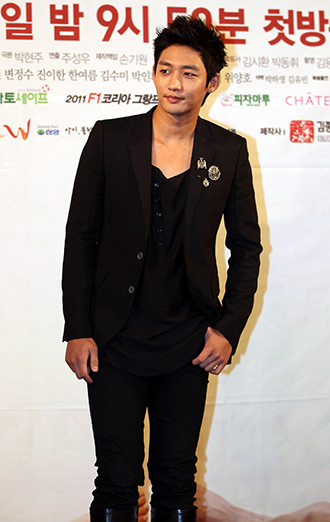 Actor Lee Tae-sung shocked the public yesterday by revealing that he has a wife and a son. Ladies’ Dong-A broke the news on Thursday that the 27-year-old rising star is a family man, with a wife seven years his senior and a year-old son.

According to the women’s monthly publication, Lee’s wife is an office worker who quit when she gave birth. The couple met three years ago and apparently filed for marriage in April. The family lives in Gyeonggi to be close to Lee’s parents, who dote on their grandson.

Lee said he kept his family life a secret because he wanted to establish himself as an actor first and foremost.

Through Twitter, Lee spoke directly to fans yesterday saying, “You must be shocked. I’m walking down the aisle at last.”

Although no details on the upcoming nuptials were mentioned, he did ask for continuous support and vowed to “become a better, more dedicated actor.”

Lee rose to fame from dramas such as “Playful Kiss” (2010) and this year’s “Rooftop Prince.”
By Carla Sunwoo