A pyramid scheme involving 2,000 church pastors around the country and 140 billion won ($128.9 million) worth of investments made by deceived investors was busted by the police Monday.

The police also booked another group of 11 suspects without physical detention on the same charge. 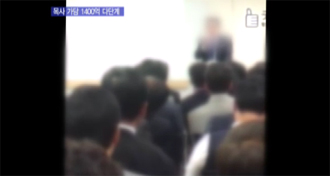 The 12 suspects promised potential investors that they could receive up to 10,000 won every day indefinitely once they made investments of 330,000 won to 5.5 million won.

The leaders of the scheme promised investors that if they invested in the online shopping networks they would receive returns on clicks on Internet advertisements.

The police also reported the targeted investors were easily duped into the scheme as the suspects gave out financial rewards to them immediately with money received from other investors who were also part of the pyramid scheme. “The online shopping site touted by the suspects was barely functional as it was just a facade for the fraud,” said the police.

The police added many of the tricked investors were church members. “A total of 2,000 church pastors were involved in the scheme in luring investors,” said the police.

“The suspects tricked the victims saying they could make money with just one click on an Internet advertisement,” said Park Jong-sam, director of the criminal affairs department at the agency. “Initial payments handed to investors that were gained from other investments by deceived victims kept the pyramid scheme in operation until the bust.”