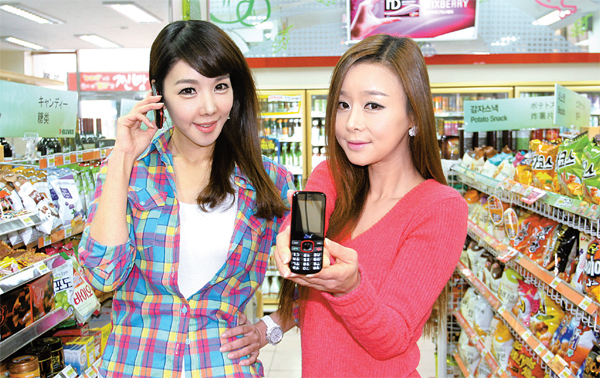 Models pose with the mobile feature phone, 2nd, launched by 7-Eleven, local convenience store chain, at one of its stores in Jung District, central Seoul, yesterday. The convenience store started selling its Mobile Virtual Network Operator feature phone at its 20 stores in the central Seoul area today for the first time as a domestic retailer. Provided by the company


Local consumers can now pick up a new feature phone with the minimum of fuss and for the lowest-ever price in the country as a local convenience store chain began selling a low-performance model today for less than $80.

It is the first time a domestic retailer has jumped into the Mobile Virtual Network Operator (MVNO) business. MVNOs borrow networks and communication frequencies from established telecom companies. This enables them to offer subscribers cheaper payment plans centered on basic calling services.

The chain released its handset in partnership with mobile phone companies Prepia and SK Telink at 20 of its stores in Jung District in central Seoul. It is set to expand the number of stores to 7,000 nationwide next month.

Sales are targeted at young children, students, temporary users and those seeking a second phone for personal or business use, 7-Eleven said.

“Its biggest advantage [apart from its price] is that it is the first dual-USIM-equipped phone made in Korea,” said Cho Yoon-jung, a marketing director at 7-Eleven, referring to the technology known as universal subscriber identity module. “This means people can use different SIM cards for domestic and overseas use.”

As users can save on expensive roaming costs by buying cheap SIM cards overseas, it is expected to be popular among those who regularly travel abroad for business trips, vacation or to study. It also uses pre-paid system and comes with 10,000 won already charged on its domestic SIM card. Users can get a phone number within 10 minutes of making their purchase by subscribing online, Cho said.

“Consumers can select a payment plan online, and charge the phone after subscription by credit card, credit transfer or ARS [phone reservation system],” she added.


7-Eleven believes it will appeal to smartphone owners looking for a cheap second handset, hence the name. It also adds convenience as people don’t need to set up a contract, which often requires proof of residence.

“While the utilization rate of pre-paid mobile phone in OECD countries exceeds 40 percent, due to factors such as convenience of subscription, only 2 percent of Korean mobile phone users use pre-paid handsets,” said Oh Jae-yong, head of 7-Eleven’s service department.“Sales of thrifty phone at convenience stores will contribute to the development of the MVNO business,” Oh said.