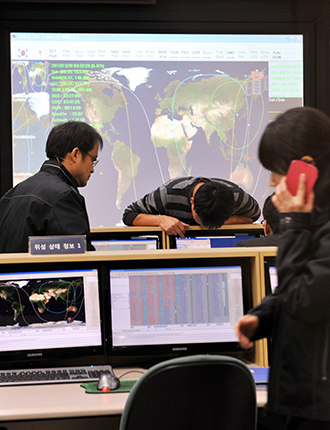 Staff at the Satellite Technology Research Center of Kaist conduct a final rehearsal yesterday to communicate with a satellite the Naro is supposed to lift into orbit today. By Kim Seong-tae

DAEJEON - It’s a tense time for anyone having anything to do with today’s planned launch of the Korea Space Launch Vehicle, also known as the Naro rocket.

At the Satellite Technology Research Center in Daejeon yesterday, researchers looked grim as they made final checks of the satellite that the Naro is supposed to lift into orbit.

Sitting at computer terminals, the researchers were updating the status of the Korean-designed research satellite, confirming the functioning of the satellite’s solar panel and also the temperature.

Each time they’ve prepared for past launches, their hopes have been dashed. The first attempt in August 2009 failed when the satellite didn’t separate from the second stage of the rocket and both plummeted back to earth.

The second attempt in June 2010 failed when the rocket exploded two minutes and 17 seconds after liftoff for reasons that still have not been determined.

And a third attempt was aborted last month when a helium leak was found because of a broken rubber seal in the connector between the rocket and its launchpad.

A new linking mechanism was sent by Russia, and the Korea Aerospace Research Institute said it has been successfully replaced.

“We have found the cause of failure of the previous launch attempt and have prepared and checked thoroughly,” said Lee In, an official from the Satellite Technology Research Center. “We will make it this time for sure.”

If Korea finally succeeds in putting the indigenously developed satellite at least 302 kilometers (187 miles) above earth and into orbit, it will become the 10th country in the “space club,” which includes neighbors Japan and China.

A final launch rehearsal took place at the Naro Space Center in Goheung, South Jeolla, yesterday. The rocket was transported from its assembly complex to a launch pad at the center on Tuesday.

Neighborhoods near the space center were also on edge. Restaurants and lodging facilities in South Jeolla’s Goheung and Yeosu were crowded with researchers and tourists who came to watch the launch. “I heard this would be the last rocket launch,” said Kim Dong-min, a 77-year-old resident of Goheung. The Ministry of Education, Science and Technology said earlier that this will be the last attempt to launch a version of the Naro rocket into space. “I really hope the launch succeeds,” Kim said.