Korean musicals are finding a home in Japan

Korean musicals are finding a home in Japan 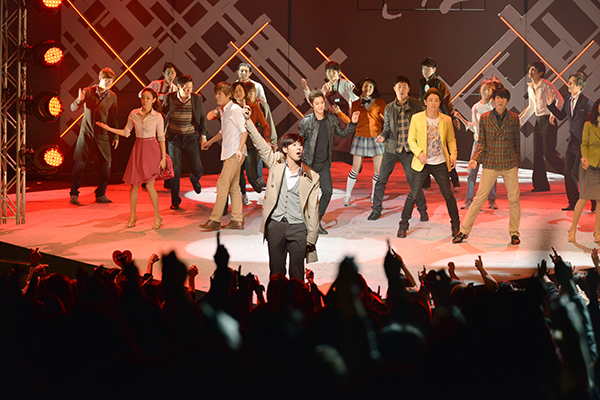 K-pop idol Yunho of boyband TVXQ plays the main character in the musical “Gwanghwamun Sonata” on Nov. 21 at the Shin Shin Kabukiza Theater in Osaka, Japan. Provided by the production company


OSAKA - When singer Yunho of boy band TVXQ appeared on the stage at the Osaka Shin-Kabukiza Theater in Japan on Nov. 21, the 1,500-seat auditorium was filled with the shrieks of female fans who occupied near 95 percent of the seats.

But this was no ordinary K-pop concert, it was “Gwanghwamun Sonata,” one of the K-musicals that have found success in Japan in recent years.

As Yunho was scheduled to take the lead role in the musical for only two days, tickets were sold out in advance. Pamphlets, posters and souvenirs with the idol star’s face being sold in the lobby of the auditorium were being snatched up one after the other.

These fans had such a big heart for their idol star, responding to Yunho’s mistake during a dance routine on the stage with laughter and cheers. When the curtain came down, the audience shouted “Encore! Encore!” for at least five minutes.

Yunho is not the only Korean idol to perform in “Gwanghwamun Sonata” in Japan. Boy group MBLAQ’s G.O and Seung-ho; Sung-jae of Supernova; Choi Min-hwan of F.T. Island; and Kevin of ZE:A also are taking parts in the musical, while Sung-gyu and Woo-hyun of Infinite are scheduled to join in January.

“Since this is an original Korean musical, it’s not as popular as those from American Broadway or the West End musicals in the United Kingdom,” said producer Lim Young-geun.

“By casting a K-pop star to be part of the musical, it establishes a more lively interest and positive reviews follow.”

Compared to performances in Seoul, “Gwanghwamun Sonata” has become more polished in terms of its stage production and overall management. A director of Yomiuri TV, surnamed Makino, said, “It is impossible for Japanese musicals to be better than Korean musicals.”

After the performance in Osaka, the Korean musical will move to Tokyo in January at the 140-year-old Meiji-za Theater. The director of the theater also welcomed the Korean musical, saying, “It is definitely better than Japanese musicals. I’m just really happy to introduce such a great show to the Japanese audience.”

The production system for “Gwanghwamun Sonata” has been upgraded as well. Apart from the contracted profit share, the Korean production team takes an additional 13 percent of the revenue in Japan as a royalty.

For Korea, which used to rely heavily on imported musicals from abroad, it is a significant development. Now, the country is busy exporting its own musicals.

Recently, the Korean musical “Jack the Ripper” that was performed at the Aoyama Theater in Tokyo, secured a staggering market share of 81.5 percent.

Critics point out that the musical’s “vintage-style” story plot, which was adapted for Japanese audiences, contributed to the musical’s success in Japan, but most of all they point to the Hallyu star casting as the reason behind for its success. An encore of the musical is scheduled to take place in January.

“As well as the main actors, the cast ensemble itself is perfect,” said Kanta Asada, manager of the Japanese agency Quaris that imported “Jack the Ripper.”

“The popularity of Korean musicals in Japan will go on for a while.”

There are already 16 Korean musicals scheduled to be staged in Japanese theaters next year.