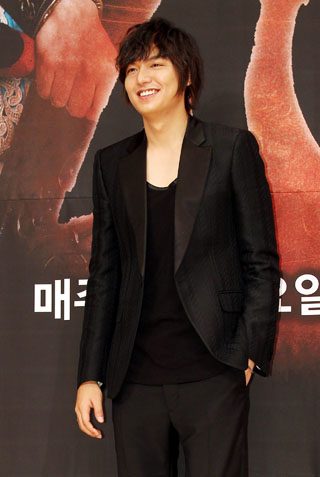 Lee Min-ho visited Japan on Dec. 2 to promote the drama “Faith,” which will begin airing over there from Dec. 5.
At a press event for the show which was held at the Grand Intercontinental Hotel in Yokohama, Lee said that he was glad to be in Japan and that he hoped to “spend some good time with fans ahead of Christmas” while there.

When asked if there were any similarities between his on-screen warrior character and himself, Lee said there was.
“He tries to keep his word, which is something I strive for too,” said Lee who did say that the difference between the two were that he takes a more active approach when it comes to matters of love.

The show starring Lee and Hallyu actress Kim Hee-sun is a time-travel drama that revolves around a warrior from the Goryeo period, played by Lee, and a present-day doctor played by Kim. The program will air in Japan on NOTTV.