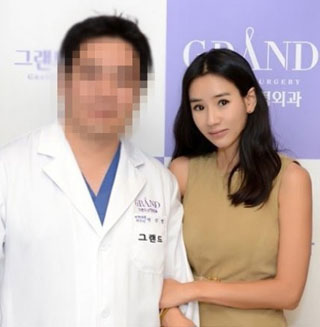 There are supporters and haters of the Yoon Hyun-sook news that broke on Dec. 3.

The 40-year-old singer-turned-actress had been targeted when a photo uploaded by a cosmetic surgery clinic revealed the actress posing with the in-house doctor.

The clinic said that Yoon had for a long time suffered from having jaw pain resulting from a square jaw line.

Netizens were shocked at the drastic change in the entertainer’s appearance, and while many said that she looked beautiful, some thought that she had gone too far.

After the picture started circulating online, Yoon defended herself on her Web site by saying she was happy with the result and glad for the supporters.

“Many are criticizing, but many more are also showing their support. Thank you,” said Yoon, who added that because of surgery she was no longer living in jaw pain.