Messi gives Barca cause for concern

Messi gives Barca cause for concern 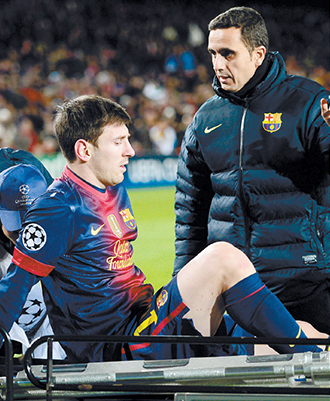 FC Barcelona’s Lionel Messi from Argentina is placed on a stretcher after suffering an injury during a Group G Champions League match against Benfica at the Camp Nou stadium in Barcelona, Spain, Wednesday. [AP/YONHAP]

BARCELONA - Lionel Messi was stretchered off with a knee injury as Barcelona drew 0-0 with Benfica at the Camp Nou, a result that saw Celtic go through at the expense of the Portuguese from Champions League Group G.

The club later confirmed the injury was only bruising to the left knee, but added that the Argentine “is still awaiting more tests to determine the extent of the injury.”

Benfica needed only to match Celtic’s result against Spartak Moscow and they wasted a number of excellent chances against a weakened Barca, especially in the first half and were to rue them as Celtic snatched a 2-1 win over Spartak Moscow.

Messi was brought on as a second-half substitute but went down clutching his knee late on in the game.

The Catalan side cruised through the group stage with just one defeat, away to Celtic, in what has been a prolific start to the season where domestically they have established a new record of 13 wins from 14 games.

Fans turned up hoping to see Messi match or better Gerd Mueller’s record of 85 goals in a calendar year but in the end the night finished on a sour note with the Argentine still a goal behind.

“It doesn’t appear too serious as it is a knock to his knee but he will have to have tests now to find out exactly what the situation is,” said coach Tito Vilanova.

“He is calm although a little worried as you would expect for a player with an injury who is waiting to know how serious it is.

“I played him for the last 30 minutes to give him a run out and he didn’t play just to break the record as if that had been the case then he would have started.

“A player can get injured at any moment and at the end of the day we are Barcelona and we are playing in the Champions League.”

In Paris, Chelsea made the wrong sort of history as they became the first holders to exit the Champions League at the group stage despite winning their final group game.

Chelsea’s despair was in contrast to the joy in Glasgow as Celtic reached the Last 16 with a 2-1 home win over Spartak Moscow and become the first Scottish side to garner 10 points from the group stage.

Galatasaray secured the 16th and last place as they came from behind to beat Braga 2-1 in Portugal making Cluj’s stunning 1-0 defeat of Manchester United at Old Trafford academic because of a better head-to-head record with the Romanian side.

While United had already sealed top spot, it was not a memorable way for manager Alex Ferguson to celebrate being in charge of United for the 200th time in the Champions League.

Chelsea’s victory gave interim coach Rafael Benitez - who has received a less than warm reception by the Chelsea fans since he replaced Roberto di Matteo - his first win in four games at the Stamford Bridge helm.

“The other game was out of our hands, so we couldn’t do anything about it,” said Benitez, who will not have enjoyed seeing some Chelsea fans holding up posters of another former Chelsea manager, Jose Mourinho, imploring him to return.

“I said before that we just had to do our job.”