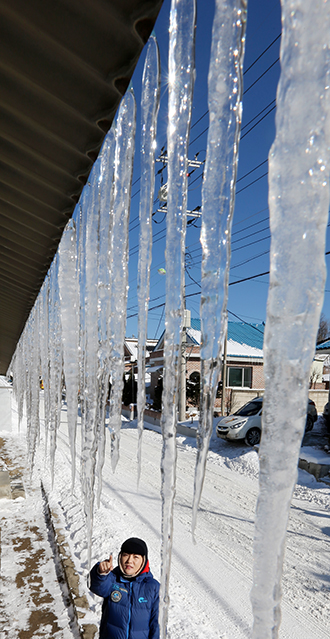 Icicles grow from the eaves of a house in Pyeongchang, Gangwon, yesterday as an early cold spell moves in and refuses to end. [YONHAP]

With a very early cold wave and one of the heaviest snowfalls in early December in decades, the nation began its winter power crunch.

The government thought that mid-January was going to be the most difficult period for supplying electricity to homes, offices and factories, but it’s already getting close to possible power shortage. The first close call of the winter for power reserves falling too low was raised yesterday morning.

And snow, which was heavy Wednesday and light yesterday, is forecast to continue today and early next week. The temperature, at a minimum of minus 10.3 degrees Celsius (13 degrees Fahrenheit) in Seoul, is also lower than the average low for early December, which is 3 degrees.

Thus, the atmosphere was tense at the Central Power Control Center of the Korea Power Exchange in Samseong-dong, southern Seoul, yesterday at 10:30 a.m. when the needle on a gauge pointed to 3.97 million kilowatts, the level of Korea’s power reserves.

If the reserves fall below four million kilowatts for 20 consecutive minutes, an “interest stage,” or first-stage alarm, is raised. That was narrowly avoided yesterday.

Yesterday, the Korea Electric Power Corporation was able to communicate with 1,300 businesses to cut down power usage. Between 9 a.m. and 11:30 a.m. yesterday, Kepco, through communicating with major enterprises including Posco and Hyundai Steel, managed to decrease power usage by 1.75 million kilowatts and contained the situation. The reserves rose to 10 million kilowatts by noon.

At 6 a.m. yesterday, there were 13 million kilowatts of power reserves. But with Seoul’s temperature below minus 10 degrees Celsius and all the snow outside, people went to work and cranked up the heat, and power consumption rose.

The Ministry of Knowledge Economy had forecast that the third and fourth weeks of January would be critical for power shortages, especially if the temperature dipped to minus 10 degrees Celsius and below and stayed there for several days. It estimated in that situation reserves would fall below 12.7 million kilowatts and emergency measures would be needed to cut usage and raise power supplies. 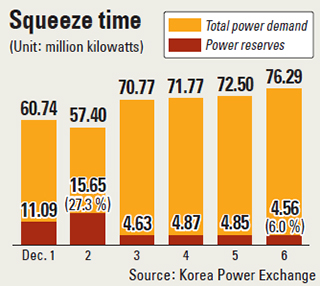 Energy supplies are low because six nuclear reactors are shut down, including two that were shut down last month in Yeonggwang County, South Jeolla, due to cracks discovered in control rod tunnels. Each reactor has a capacity of 10 million kilowatts.

Two other reactors at the same nuclear facility were shut down last month after it was found that they were using parts supplied by companies that circumvented proper supply procedures. They are capable of generating a total of 20 million kilowatts.

Eight parts suppliers were found to have fabricated certifications over the last decade, the ministry said last month.

“Although those bogus parts will be replaced in mid-December,” said Minister of Knowledge Economy Hong Suk-woo, “other bogus suppliers have been uncovered in inspections by the Nuclear Safety and Security Commission and the Board of Audit and Inspection.”

If other reactors are found to have parts from bogus suppliers, they might also have to be shut down.

The Korea Meteorological Administration yesterday forecast that Sunday morning temperatures are expected to drop as low as minus 12 degrees Celsius and heavy snowfall is expected until early next week.