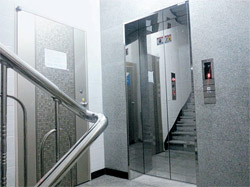 A 23-year-old college graduate stabbed a total stranger waiting for an elevator in an office building in Ulsan, a reminder of a string of violent run-amok crimes earlier this year.

The Ulsan Nambu Police Precinct said yesterday they were questioning the suspect, a woman surnamed Choi, for allegedly stabbing a 62-year old woman three times in her chest and back at around 6:30 p.m. Wednesday in front of an elevator on the third floor of a commercial building in Nam District, Ulsan.

Choi’s mother works as a cashier at a beauty equipment shop on that floor.

The suspect was visiting her mother at the shop Wednesday and without warning attacked the victim, who was surnamed Han, with a 13-centimeter (5-inch) fruit knife.

The two are not believed to have known each other.

Han was pronounced dead in a hospital from loss of blood. Choi was arrested at the scene after waiting for the police to arrive with no facial expression, witnesses said.

According to police, Choi studied craft design at an undisclosed school in Busan and did not have a regular job after graduating this year. She worked part time at a cosmetic shop in a department store before quitting early last month.

She started visiting her mother’s workplace about two weeks ago but didn’t interact with customers. Normally she shopped online using a computer at the shop.

“She is very introverted and not very talkative,” Choi’s mother was quoted as saying by the police. “We did not urge her to get a job knowing it would put her under pressure.”

Choi exercised her right to remain silent during police questioning yesterday and did not show signs of remorse, according to the authorities.

The police are having a hard time understanding her motive for the alleged crime.

She lived with a normal family and did not have conflicts with people around her, the investigators reported.

“We have yet to find what drove Choi to murder a total stranger,” a police spokesman said. “We suspect she has a psychological problem given the strange nature of the case.”

The authorities are investigating whether Choi suffers from dissociative identity disorder, also known as multiple personality disorder. She will be sent to the Institute of Forensic Psychiatry for evaluation after being formally charged.