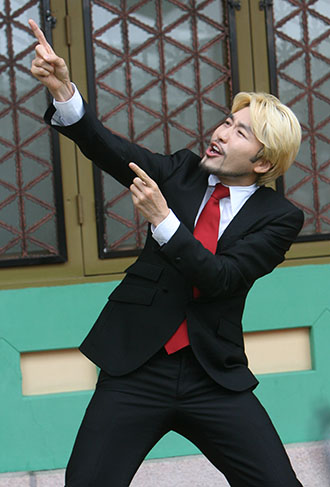 No Hong-chul denied a rumor regarding his sexual orientation.

The 33-year-old entertainer, known for his feminine demeanor, was on a panel at a KBS 2 entertainment show on Saturday, where Kim Jho Kwang-soo, a filmmaker, was invited to talk about his life as a homosexual.

During the show, No mentioned an anecdote between him and Kim C, a singer and part of the show, who No said had asked him, “You’re gay, aren’t you?”

“I was taken aback because he asked the question so seriously,” No said. “I explained to him that I am not, but he asked me similar questions several times after that.”

Kim C said it was because of No’s flamboyant style that he suspected he was gay.

“He has many similarities to gay friends of mine,” Kim C said. “Some gays intentionally talk about the other sex, trying to conceal the fact that they are gay.”

At the show, No also denied a rumor that he is wearing women’s underwear.