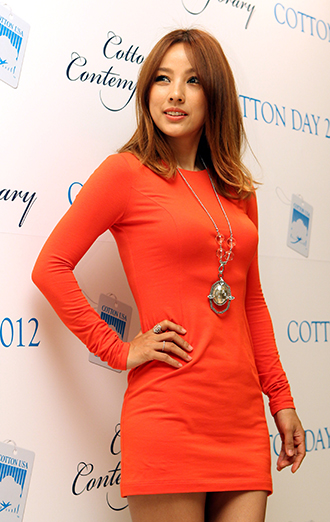 Lee Hyo-ri announced that she’s set to release an album next spring. Although there have been persistent rumors about an upcoming album, this was the first time the singer spoke about it.

The announcement came on Saturday at comedian Kim Je-dong’s performance, in which Lee appeared as a guest.

The two entertainers were exchanging greetings when Kim asked Lee about her plans.

“I’m currently working on it for release around May,” said Lee, 33, adding that the album will contain her trademark upbeat dance tunes.

“Just because you are old doesn’t mean you can’t dance,” joked Lee.

Lee’s agency B2M Entertainment also confirmed the details yesterday, saying Lee is in the process of selecting songs. “There is no title track as yet, and we think we’ll have a better idea of the details once we do,” the agency told My Daily, a news Web site, yesterday.

The album will be Lee’s first in more than three years since the release of “Logic.”