KARA members to stand as soloists

KARA members to stand as soloists 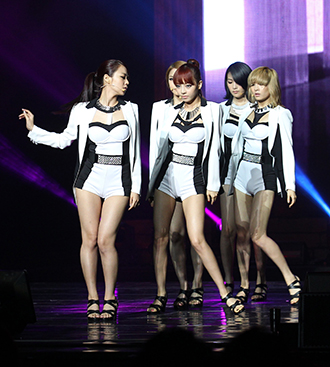 After releasing its “Solo Collection” last month, the girls of KARA will be promoting their individual songs on TV.

Seungyeon, Gyuri and Jiyoung have all been allotted time slots on leading music programs and Seungyeon will set the bar for all members with her performance of “Guilty” on MBC’s “Music Corel” on Saturday.

Then Jiyoung will perform on SBS’s “Popular Songs” with “Wanna Do” on Sunday, while Gyuri will follow suit Dec. 23 on the same SBS show with “Daydream.” This will be the first time that the three girls take to the stage as solo acts.

Yesterday, the band also announced that its concert at the Tokyo Dome next month is sold out.

DSP Media said all 45,000 tickets for the show were gone after being released for fan club members last month and last Saturday for the general public.

When KARA performs at the “Karasia 2013 Happy New Year in Tokyo Dome” concert on Jan. 6, it will become the first K-pop girl group to perform in the dome.