Debris from Pyongyang’s missile is recovered

Debris from Pyongyang’s missile is recovered 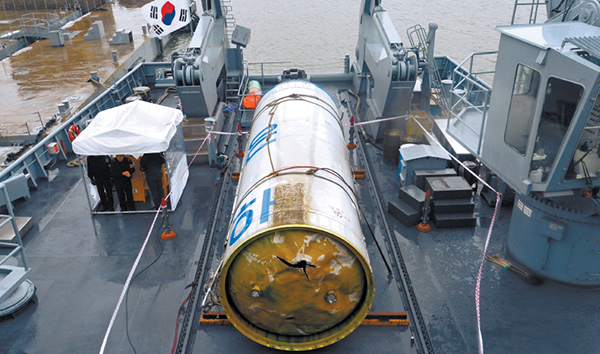 A piece of the first stage of North Korea’s long-range rocket retrieved by the South Korean Navy shown yesterday at the Second Command Fleet in Pyeongtaek, Gyeonggi. The object is believed to be part of a fuel container from the first stage. The Korean characters “Unha” (Milky Way) were written on it. [NEWSIS]


Debris from North Korea’s long-range rocket was retrieved for study by the South Korean Navy yesterday and arrived at the Second Command Fleet in Pyeongtaek, Gyeonggi, at around noon, the Ministry of National Defense said yesterday.

The object is believed to be part of a fuel container from the first stage of the three-stage rocket Pyongyang successfully launched Wednesday.

“We expect to examine the fuel’s components, the capacity, the rocket’s materials and thrust technology by closely examining the debris,” said Kim Min-seok, spokesman at the Defense Ministry. “Although North Korea has fired off missiles before, we have never gotten the debris, and it’s going to be important material to study the North’s missile capability.”

Kim said the research will be led by a joint investigation team composed of military officials as well as scientists from rocket and weapons development agencies. A senior military official also said American experts, who have experience analyzing missiles developed by the former Soviet Union and Iran, will participate in the investigation.

The Defense Ministry said the 7.6-meter-long (25-foot-long), 3.2-ton object with a 2.4-meter diameter will be delivered to the Agency for Defense Development in Daejeon for analysis.

After the North launched the Unha-3 rocket Wednesday, the first stage fell in waters off the South’s west coast near Gunsan, North Jeolla, while the second stage fell into waters near the Philippines, according to the Defense Ministry.

A South Korean Aegis destroyer stationed in the Yellow Sea was able to discover the object, and a rescue ship retrieved the debris at 12:26 a.m. yesterday. It was delivered to the Second Command Fleet in Pyeongtaek. 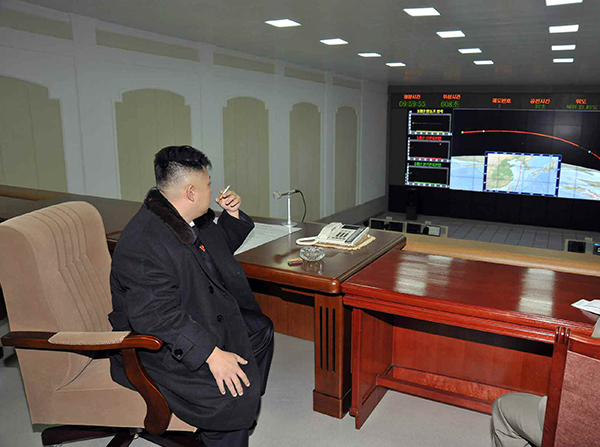 North Korean leader Kim Jong-un monitors the launch of the Unha-3 rocket at the General Satellite Control and Command Center on Wednesday. [YONHAP]


According to the ministry, the object was inscribed with “Unha” in hangul.

Meanwhile, the North’s Korean Central News Agency said yesterday that its leader Kim Jong-un gave a “final written order” on the day of the launch and personally directed the liftoff.

“Kim gave a final written order regarding the launch of the second version of Kwangmyongsong-3 to the Korean Committee of Space Technology at 8 a.m. on Wednesday,” the KCNA said in a statement yesterday. Kwangmyongsong-3 is the name of the satellite that was allegedly the rocket’s payload. Analysts are not sure if the object put into orbit is actually a functioning satellite.

“He [then] arrived in the control center an hour before liftoff,” KCNA continued, “learned about the preparations for the launch, issued an order on the launch and keenly observed the whole process of the launch.”

Kim was accompanied by his uncle Jang Song-thaek, vice chairman of the National Defense Commission, and Pak To-chun, secretary of the Central Committee of the Workers’ Party, according to the KCNA.

It also said that the young leader, who succeeded his father Kim Jong-il a year ago, called for his regime to continue its “space program.”

The outside world has condemned the North’s launch as a disguised test of its ballistic missile capabilities. Countries including South Korea, the U.S. and Japan have been moving swiftly to come up with possible punishments for the launch, which violated United Nations resolutions. They will have to convince China, the North’s closest ally, and Russia to approve any tougher sanctions.

“We engage with the Chinese, the Russians, and others on the Security Council and beyond in our effort to build a consensus about the unacceptability of North Korea’s actions with regards to its ballistic missile program and obviously its nuclear program,” said Jay Carney, press secretary at the White House, on Wednesday. “And we will work with those partners and others as we move forward to make clear how isolated, how in violations of norms this action by North Korea is.”

Questions have been raised over North Korea’s ability to hit the U.S. mainland with a missile.

U.S. Secretary of Defense Leon Panetta said in an interview with CNN Wednesday, “I’m very confident that American defense capabilities are able, no problem, to block a rocket like this one.”

Vladimir Evseev, a missile expert from Russia, said in an interview with Yonhap News Agency yesterday, “It is an exaggerated assertion that North Korea has the technology to launch a long-range missile that could hit the U.S. mainland after loading a nuclear warhead.”

“Putting something up in the air is only part of the problem,” said Mark Fitzpatrick, director for non-proliferation and disarmament at the International Institute for Strategic Studies in London in an interview with BBC on Wednesday. “You have to bring it down to earth. You need a warhead that is small enough to fit on top of the missile. You need an elaborate form of shielding to protect the warhead against the intense heat.”