Comedian couple get serious on TV

Comedian couple get serious on TV 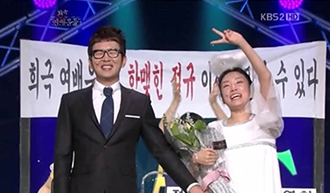 Comedian couple Yoon Hyung-bin and Jung Kyung-mi are set to tie the knot, and in true comedic fashion, the proposal itself took place on the set of “Gag Concert.”

During her usual segment, in which she vents her frustration with her boyfriend of seven years who still hasn’t proposed, Jung declared that she’d had enough and that she would break up with Yoon once and for all.

In the previous episode, she promised viewers that by next week she’d either come back with a ring or bring her boyfriend to defend himself.

Claiming that she failed to fulfill either, Jung went on to say she was splitting with Yoon.

Before she could finish her sentence, 32-year-old Yoon appeared on stage dressed in a suit.

Yoon complained about being the butt of all the jokes since his girlfriend took on the segment.

He went on to say that he wanted to bring a case against Jung for the inconvenience and for stealing his heart. Then he presented her with a ring.

The two will walk down the aisle in February.