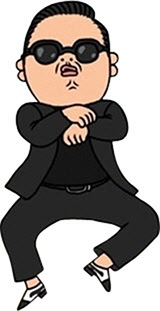 Just after Billboard and YouTube paid its respect to the king of Gangnam, MTV also gave props to Psy and his worldwide hit, “Gangnam Style.”

On Dec. 18, MTV’s Web site picked the Korean rapper’s video as “Our Viral Sensation of the Year.”

“It’s hard to remember a world without the 34-year-old South Korean sensation,” said the music channel network.
Although everyone wants a piece of Psy right now, fans from the Philippines may have to wait a little while longer to see Psy in action.

On Dec. 19 Psy’s agency announced that his scheduled performance at SM Mall of Asia the following day was canceled due to weather conditions.
The 20,000 crowd that was expected will have to wait until February next year to catch the “Gangnam Show.”