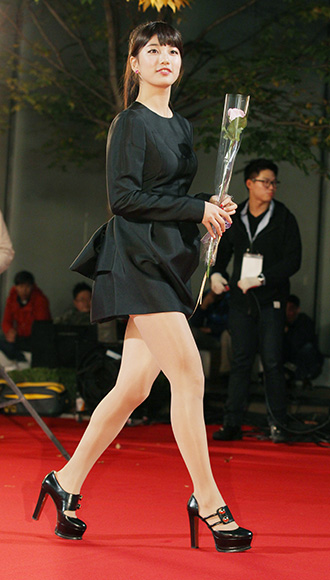 The versatile singer won Best Newcomer of the Year for Variety Shows during the KBS Entertainment Awards, where she was one of the MCs.

“I am not sure I am eligible to get this award, but I really appreciate it,” Suzy said in her acceptance speech. “I would be a harder-working Suzy.” KBS also gave her the Best Cameo Appearance on a Variety Show award.

Suzy, 18, whose real name is Bae Su-ji, successfully brought her acting talents onto the silver screen with her first movie, “Architecture 101,” released in March. For the movie, she was named best new actress at the Baeksang Arts Awards in April and the Blue Dragon Film Awards last month.

Her healthy-teenager image has had broad appeal, topping a recent survey of people of all ages of the best celebrities to spend the Christmas holidays with, along with actor Song Joong-ki.