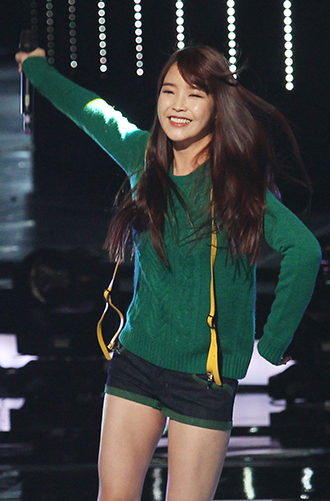 IU, who has kept a low profile after an intimate picture of her and Super Junior’s Eunhyuk went viral, spoke directly to fans for the first time in over a month on Tuesday.

The Hallyu star wished everyone a merry Christmas through her official fan Web site before revealing that she has been staying at home for the past few weeks.

“I’ve been keeping myself locked up inside,” she said, adding that she plans on lying low during the rest of the holiday season.

“I hear it’s snowing outside. I wouldn’t know because I’m staying indoors.

“I’m sorry to [fans] who have no doubt been losing weight from the stress.”

She said it won’t be long until she “ventures out” and asked her followers to bear with her in the meantime.

Last month, IU accidentally uploaded a picture of herself in pajamas cozying up next to Eunhyuk, who appeared to have no shirt on. It spread online instantly despite being deleted shortly after it was posted.
By Carla Sunwoo